Tag Archives: The Marketplace at Santee 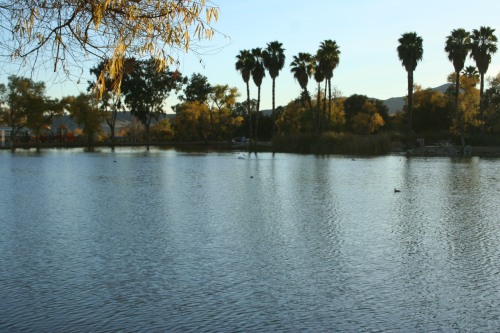 As I indicated yesterday, I’m using these last few days of the year to look back over 2009. In Part 1 I reviewed January through April, so today we begin with May.

May actually started off with a post on an event from the end of April. On April 30 Simply Spa held a Wellness Expo and Open House to provide an opportunity for people to learn about massage, chiropractics, acupuncture, and nutrition. The evening was quite successful, with a good deal of information being shared. The first few days of the month also included promotional posts for the final “Love and Forgiveness” series discussion at the Santee Library, the Post Office’s annual Stamp Out Hunger Day, and River Days. Later in the month I posted on an E-Waste Recycling event, new restrictions due to the ongoing drought, the Hollywood Tans third anniversary celebration, and the May Chamber Mixer.

The first big event of the month was the grand opening ceremony for Marketplace at Santee – also known as the Henry’s Center. This is the shopping center that was built on the site of the old roller rink on Mission Gorge Rd. The event included music from the West Hills High School Pep Band, the obligatory speeches, and dedication of the Santee Schools Arts Attack Tile Project – a series of decorative tiles created by local students. Each of the students involved in the project was honored and given a certificate and a gift bag.

Not as big, but important in other ways, was the Frubble After-Prom Party. This event was created to provide students with a safe, alcohol-free activity to go to after their prom (after all, who wants to go home right after the prom?). The party included $1 frubble drinks, snacks, and music provided by DJ ANOMIE and the Mayors of Sexy Town.

The real BIG EVENT of the month was the first Santee Street Fair. This was an amazing event on many levels. First of all, the planning for the Street Fair didn’t even start until January. In just a matter of a few months the Chamber of Commerce was able to pull together scores of interested participants, plow through red tape, promote the heck out of the event, and live through it all. The few thousand that the Chamber hoped would attend became tens of thousands, and all this with very few minor problems and no major ones.

June started off with a promotional post for the annual San Diego’s Best 2009 survey/competition from the San Diego Union-Tribune. Two Santee businesses, Domo Sushi and Santee Lakes Campground, were nominated and one, Santee Lakes, won its category. Now, I’m not saying that I had anything to do with their victory, but… 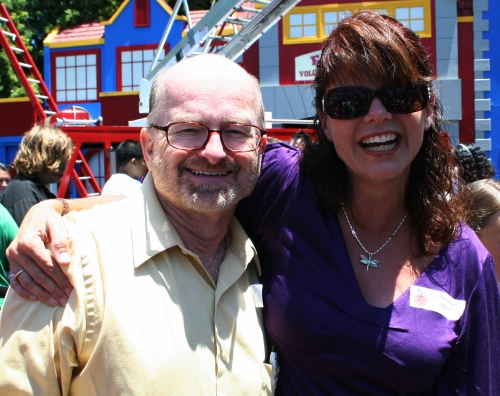 Early in June I posted a more detailed review of the Santee Street Fair, including more photos. Another event I covered was the seventh annual Legoland Teachers Are Heroes award ceremonies, during which teachers from Cajon Park School and Rio Seco School were among the dozen educators honored. During June I also wrote about the new off-leash dog parks, the Greater East County Chambers of Commerce Alliance (GECCA) Networking Trade Show, Frubble’s first Open Mic Night, and the monthly After-5 Mixer. June also saw two fund raising events, the Friendly Grounds Pancake Breakfast for Santee Santas and the 6th Annual Golf Classic to support the Santee Schools Foundation. Oh, yes, and I posted two Food Patrols on Frubble and Domo Sushi.

Above all, June marks the beginning of the annual Santee Summer Concert Series. Every year this musical extravaganza features popular local groups performing in the Trolley Square amphitheater. This year the June concerts featured 80z All Stars, Lindsay Spurlock, and the Cat-illacs.

As busy as May and June were, I’m going to end here and pick up with July in my next post.

On Saturday morning, May 2, Sudberry Properties and the Santee School District held a Grand Opening for The Marketplace at Santee and Dedication Ceremony for the Santee Schools Arts Attack Tile Project.  The ceremony was held in a pleasant patio-style area on the west side of the center, behind the Starbucks, where tiles created by students in the Arts Attack programs are on display along walls and bench areas.

Long-time Santee residents remember the Marketplace as the old roller rink and several small shops.  It was a real disappointment when the rink closed down, but the age of the buildings and the presence of asbestos and other toxic elements meant that they had to go.  The property was purchased by a private group, which eventually brought in Sudberry Properties to help bring the project to fruition.    Here is what the center looked like last November when Henry’s opened.  The Tile Project is just to the right of the orange-peach colored building at the far end.

Tom Sudberry, Chairman of Sudberry Properties, was the host for the ceremonies, and speakers included his son and President/CFO of Sudberry Properties, Colton Sudberry, Santee Councilmember, Jack Dale, and Ted Hooks of the Santee School District.  Also on hand were the school Arts Attack coordinators who worked with students directly.  As the District representative, and being involved with the Visual and Performing Arts programs that include Arts Attack, Ted Hooks called out the names of students whose artwork had been chosen for display and Colton Sudberry handed out certificates.  In addition to the certificate, each student received a gift bag, presented by a member of the Santana High School cheer squad.

Before the ceremony the West Hills High School Pep Band performed for the crowd, and students and their families were treated to pastries and drinks in one of the soon-to-be store areas.  Afterwards everyone was invited to enjoy specials from some of the center shops.

Special thanks goes to Carmen McKissack of Color Me Mine, who coordinated and handled the firing of all of the tiles. 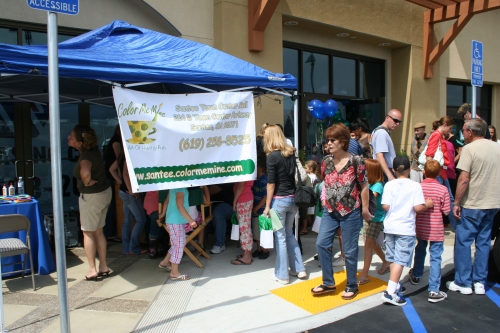 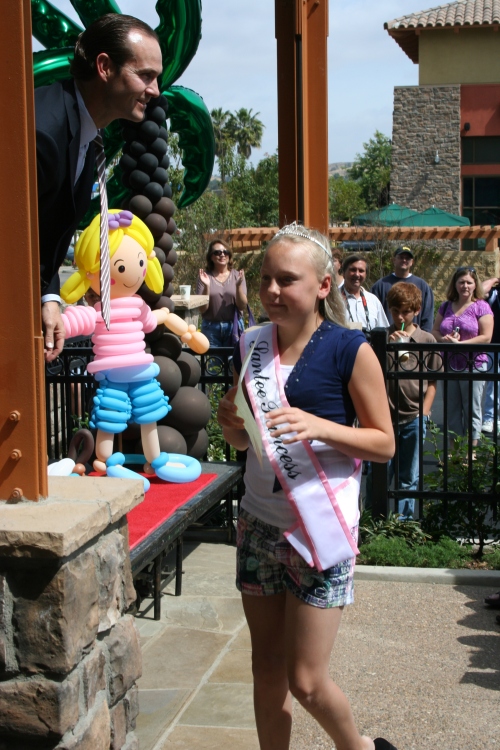 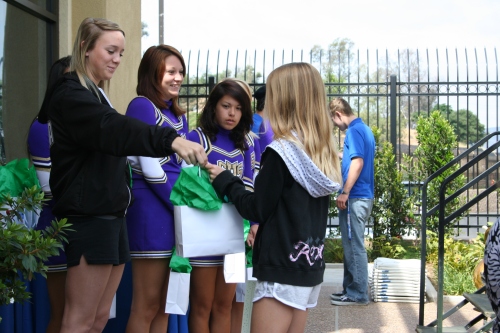 Check out a few more pictures from the event here.

This Saturday, May 2, will be the official Grand Opening of The Marketplace at Santee, the new center on Mission Gorge Rd. across from Lowe’s and Kohl’s.  In addition to the normal ribbon cutting ceremony, there will be the dedication of Art in Santee Tile Project, a series of hand-painted tiles created through the school district Art Attacks program.  The ceremony begins at 10:00 am with the ribbon cutting and dedication, followed by center store specials from 11:00 am to 2:00 pm.

Tagged as Art in Santee, Grand Opening, The Marketplace at Santee