This weekend, December 8 and 9, will be full of holiday cheer and family fun at Santee Lakes Recreation Preserve. On Saturday the first annual Lighting at the Lakes will celebrate the season with the illumination of Santee’s tallest Christmas tree. On Sunday the annual Santa at the Lakes returns with the jolly old elf himself, along with games and activities for the whole family.

The Lighting at the Lakes is also an inauguration celebration for the newly-constructed pavilion at Lake One. The fun will begin at 4:00 p.m. and will include carolers, vendors and a parade of decorated carts. Refreshments will be provided by Coffee Corner, Sweet Treats and Two for the Road. Santee Santas will be on hand to collect donations of toys for needy families, and all guests are requested to bring an unwrapped gift.

The lighting is a joint effort of Santee Lakes Foundation, Santee Lakes Recreation Preserve, San Diego State University and SDG&E. To help make this a green Christmas, solar panels will provide the energy for the lights on the tree and on the pavilion.

Every year Santa Claus visits Santee Lakes just before Christmas, bringing good cheer and a supply of snow for Southern California natives to enjoy. The day will be full of sledding, pony rides, hay rides, crafts and carnival rides. The celebration begins at 11:00 a.m. and runs until 4:00 p.m. Parking for the day is $5 and rides tickets are 50 cents each. 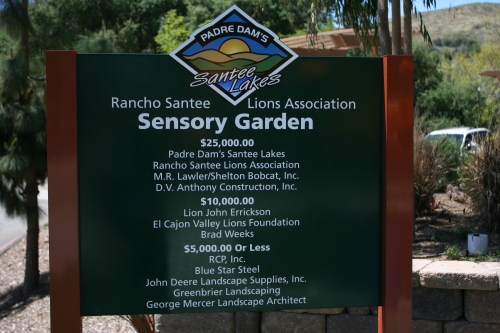 Just five short months ago A.D. “Ike” Enzenauer stood in front of a group of Rancho Santee Lions Club members, local dignitaries, and associated friends to help dedicate the Lions Club’s Sensory Garden at Santee Lakes. Now it seems that unknown individuals have decided that the community does not deserve this treasure. In July someone had removed the braille plaques that provide sight-impaired visitors with information about the plants in the garden and thrown them around the area. Then in August a number of plants were pulled from the garden.

This month Enzenauer sent a letter to Santee Patch (“Vandalism at the Santee Lions Sensory Garden”) about the events, asking for community help in finding the culprits and ending the destruction of this special community treasure. Scouting Santee would like to echo this request and ask that anyone with information contact the San Diego Sheriff’s Department, Santee Patch, or this blog. In addition, if you would consider donating to help the Lions Club replace and repair the damage caused, it would go far toward restoring Santee’s reputation as a caring and concerned community. Let’s all work together to keep Santee special.

It’s time again for Santee Lakes’ Movies by the Lake on Friday nights. Every other week, beginning this Friday, June 24, the folks at Padre Dam’s Santee Lakes will set up a giant screen beside Lake 5 for families to enjoy a recent animated film. The movies are free, although there is an $8 fee per automobile. This year the West Hills Marching Band and Color Guard will host a concession stand at the lake for your dining pleasure. They will be selling hamburgers, hot dogs, popcorn, and more and all proceeds will go to help support their activities for the 2011-2012 school year. The gates open at 4:00 and the concession stand opens at 6:00. There will be games and activities starting at 7:00 and the movie begins at 8:00. Get the family together, bring your chairs, blankets, and jackets, and have a great time.

It was the culmination of nearly seven years of planning, fundraising, and hard work when Arthur “Ike” Enzenauer, Lions Club Past District Governor, stood in front of friends and fellow Lions to dedicate the new Sensory Garden at Santee Lakes on Saturday, April 16, 2011. On hand for the ceremony were members of the community, and representatives from the Santee Chamber of Commerce and local politicians. Also present were a number of visually-impaired visitors who now could experience the beauty of a garden by touch and scent. All of the plants will have identification plaques giving both common and scientific names in English and Braille. At the east entrance to the garden there are two large plaques, one in English and the other in Braille, which detail Past Lions International Director Bill Moody’s thoughts on “Planting a Lions Garden.”

The Sensory Garden project began in 2004, shortly after the Lions Club dedicated the disabled-access fishing pier on Lake 4, next to the Kiwanis Disabled Access Playground. The new garden is in the same area, on the west side of the playground. Together the Lions and Kiwanis have worked hard to provide opportunities for disabled visitors to enjoy as much of the fun at the Lakes as possible. The Lions also have a number of project ideas in the planning stages, including possibly putting in concrete pads at points along lake shorelines to allow anglers in wheelchairs to fish from the shore as well as on the pier. They also would like to create concrete walkways with raised curbs around the lakes to provide a safe place for both vision-impaired visitors and those in wheelchairs to enjoy strolls. As Enzenauer explained, this is all part of the Lions Club’s efforts, with Santee Lakes and Padre Dam, “to make the lakes accessible to everyone, regardless of handicap.”

Speaking at the dedication, Bill Pommerling, President of the Padre Dam Municipal Water District Board of Directors, thanked the Lions for their efforts. As he pointed out, “Projects like this don’t happen just because of money; projects like this happen because of heart.” Pommerling specifically mentioned Enzenauer as one of those whose “heart” helped to make the garden possible. Santee Lakes Director of Parks and Recreation Allen Carlisle, who was also instrumental in the creation of the garden, thanked the Lions for their dedication to the project and to making it possible for more people to experience the Lakes. He even pointed out that, as the ceremony was taking place, a man in a wheelchair was fishing from the nearby disabled-access pier – something that would not have been possible without the Lions Club. 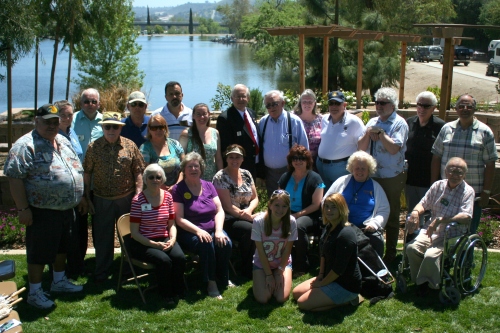 Of course, even with plenty of “heart,” a project of this magnitude does not happen without money, and the Lions worked hard through a difficult recession to bring in the $78,000 needed to get the garden to near-completion.

This included $25,000 from Santee Lakes– money that comes from user fees, not the Padre Dam MWD which created the Lakes – as well as from a number of local businesses. Perhaps one of the greatest single monetary gifts, however, was $10,000 donated by Lions Club member John Errickson, who is not only member locally but also in Florida where he spends part of the year. Errickson and a friend drove cross-country from Florida, leaving on the previous Tuesday, in order to be at the ceremony. That is the kind of dedication to a cause that is the hallmark of the Lions Clubs. However, as Enzenauer explained, the Lions Club still needs about $4000 to cover the final expenses of the garden. Anyone interested in helping can contact the Rancho Santee Lions Association.

One other person who deserves special recognition is landscape architect George Mercer, who designed and planned the garden pro bono. Mercer, who has an office in La Mesa and has worked on several Santee schools, put in countless hours on the project to help it become a reality. He explained after the ceremony that the feeling of satisfaction at making the garden possible was all the reward he needed.

The Rancho Santee Lions Association Sensory Garden is open to all who want to enjoy the beauty of nature. It is located between Lakes 3 and 4, immediately to the west of the Kiwanis Disabled-Access Playground. Padre Dam’s Santee Lakes recreation area can be reached from Fanita Parkway between Mast Blvd. and Carlton Hills Blvd. and is open daily. Vehicle parking fees for day use are $3 on weekdays and $5 on weekends and holidays. For more information, visit the Santee Lakes website. For more pictures of the day, check out my stories on Demotix and Santee Examiner.

Over 200 anglers, young and old, headed out to Santee Lakes on Saturday, April 17, for the opening of catfish season, making this the biggest catfish opening day ever.  Padre Dam had 2,000 pounds of catfish planted in Lakes 3 and 4, with more to come.  In fact, a total of 25,000 pounds of catfish is scheduled to be planted between mid-April and season’s end in October.  A number of those catfish are specially tagged and good for prizes, including cash, fishing tackle, and free fishing passes.  This year the Catfish Roundup is sponsored by Barona Resort and Casino.  Below are a few pictures from opening day. 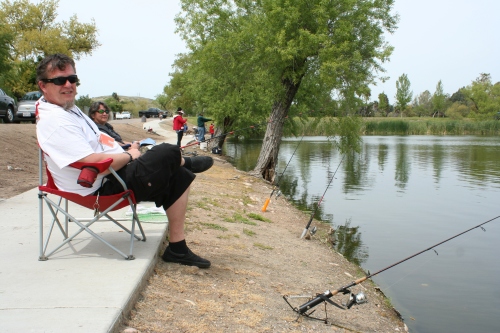 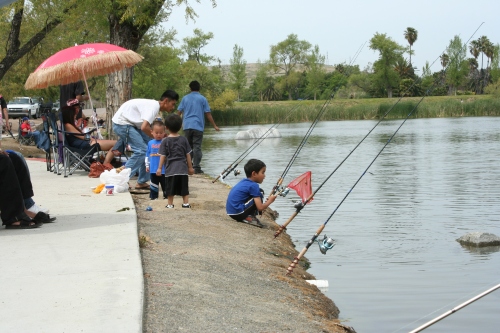 Watch out, pardners, there’s a heap o’ catfish fixin’ to stampede at Santee Lakes this Saturday, April 17.  Padre Dam is stocking 2,000 pounds of the critters in Lakes 3 & 4 for the opening of Catfish Season, and a whole mess of anglers is expected to take advantage of the opportunity.  Barona Resort and Casino is sponsoring the Catfish Roundup, which features tagged fish good for cash, fishing poles, tackle boxes, and more.  The season lasts until Halloween, and there will be a total of 23,000 pounds of catfish stocked.

Word is that the best spot for rounding up these varmints is the north end of Lake 4, along the shore.  In the northeast corner of the lake there is a small cove area which could be a good spot to stake out.  There are two fishing piers in Lake 4, the Lions Club’s disabled access pier on the south shore near the playground and a regular pier near the north shore cove.  Lake 4 also has two small islands you can reach from bridges; Lake 3 has one pier located around the middle of the east side.  The best bait seems to be mackerel, followed by mealworms, but I’m sure good ol’ stinkbait could work, too.  Check out the fun, starting at 6:00 am.  Who knows, you might just catch a real “prize-winning” catfish, or even a monster that could top the lake record of 39 pounds 4 ounces.

Remember, Santee Lakes does not require a state fishing license, just a day fishing permit available at the General Store on Lake 6.  Permits are $9 for adults and $6 for kids 15 and under.  For more information about Catfish Season, click here.

The annual Spring Eggstravaganza at Santee Lakes returns on Saturday, April 3.  The day includes food, games, rides, and, of course, egg hunts for kids age 8 and younger.  There is no cost for the event, but parking is $5 at Santee Lakes.  The fun starts at 9:00 am and lasts until 3:00 pm.  For more information check out the event flyer, or see my story on last year’s Eggstravaganza for pictures.

Scouting Santee
Create a free website or blog at WordPress.com.