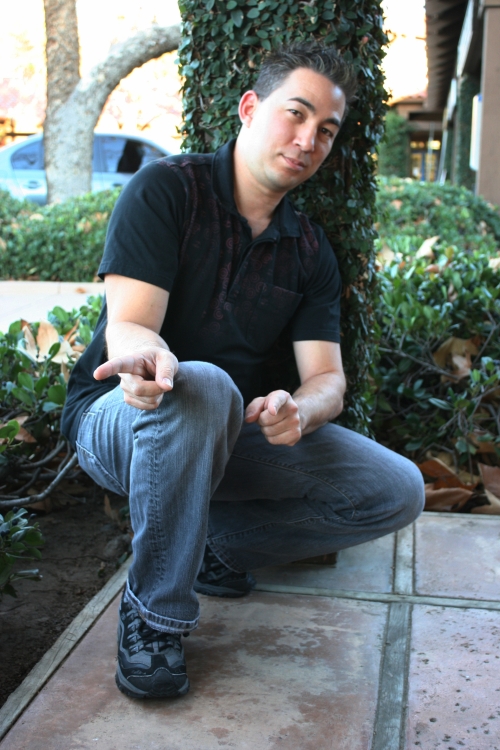 The other day I sat down to talk to Dennis Jones, better known in the local music community as DJ Dennis J of Creative Music DJs of San Diego.  Dennis specializes in weddings, clubs, and schools, but will spin the tunes at any event.  We first met at one of the Chamber’s After-5 Mixers and have run into each other a few times since then.

Dennis has been into the music scene since he was a boy, with a break to earn a BS in Computer Science and an MBA.  He remembers getting caught up by “Rapper’s Delight,” buying his first turntables in 1987, and practicing mixing in his garage.  He says he used to go down to Radio Shack to buy speakers, then go home and build the cases for the speakers.  Back then the idea was “bigger is better,” before he learned about such technical issues as air space and resonance.

During his hiatus from spinning tunes, he joined MENSA and became an IT manager (and still does some occasional consulting), but the music continued to call to him and he returned to the turntables.  But the time was well spent, because he is able to take his experience with computers and apply it to the special mixing he does for specific audiences.  For example, he re-mixes popular songs to remove objectionable lyrics for use at school events, and does it in such a way that many listeners don’t even notice the changes.

Dennis’ two favorite venues are weddings and clubs, for different reasons.  Weddings are particularly appealing for him because he is part of creating a special memory for people.  He not only wants the bride and groom to feel they made the right choice in hiring him, but he wants everyone who attends to remember it as one of the best events they have been at.  As for the club scene, it is the energy and excitement of the crowd that gets him charged up there.  One of his biggest recent gigs was New Year’s Eve at “Masquerade” at the North Park’s West Coast Tavern.  He also talked about one of his “craziest” gigs – he was playing an event at the Wild Animal Park, and every time he got on the microphone the animals in the area went nuts.  They must have been enjoying the music and didn’t want him to interrupt it.

We talked about his philosophy of mixing and entertaining, and he believes that the music has to be in the forefront of his shows.  This sounds like common sense, but it’s amazing how many people seem to think that they are the star of the show.  True, in the club scene personality creates a following, which equates to more bodies – but very few people are going to come just for a personality if the music is lousy.  For Dennis it’s all about creating a unique musical experience, then adding the personality on top of that to create a memorable event.

One of the main reasons I wanted to talk with Dennis is that he just recently took on the position of Vice President with the San Diego chapter of the American Disc Jockey Association (ADJA).  This group is the largest DJ association in the U.S., and is a meeting place for serious DJs who want to share ideas, improve their skills, or even mentor newer members.  The organization’s goal is to develop quality DJs who are dedicated to the high standards of the association.  With the advent of new technology, it has become too easy for anyone with a laptop – or even an iPod – to hang out a DJ sign, with little or no experience.  These wanna-be DJs can easily ruin an event and leave behind a bad “taste” for the people in attendance.  Dennis said that he strongly recommends that anyone hiring a DJ be sure to check that  the person they are looking at has insurance and backup equipment – just two of the requirements of the ADJA.

I have not heard Dennis do his thing, but talking to him I’ve found him to be polite, personable, and professional.  I think it would be worthwhile to check him out if you are looking for a DJ for your event.

Sierra Billock:I really enjoy giving back to my community. The feeling you get from knowing that you made a difference is amazing. I knew that as Miss Santee I would have so many more opportunities to help those in need. Also, I really think our youth need good role models to look up to these days and I hoped that as Miss Santee I could accomplish that task. I really want to encourage everyone to always strive for the best and not get caught up in things that are detrimental to their success.

Scouting Santee:What is the most important part of being Miss Santee/Miss Santee Teen?

Sierra Billock: The most important part is the impact you can have on the people around you. People know who you are and it’s important that you set a good example for others. I also think its important that you make the most out of your year as a titleholder. I have a crazy schedule this year but I know that when I look back on my year as Miss Santee I will be glad to be able to look back on all the things I accomplished.

Scouting Santee: What has been your favorite experience so far?

Sierra Billock: So far I have probably enjoyed the Santee Summer Concerts the best. The concerts are every Thursday from 6:30-8. I really enjoy listening to the music but most of all I like dancing with all the young kids who attend the event. Seeing them so happy and excited to be with Nicole and I is really heartwarming.

Scouting Santee:What advice would you give to any young women who might want to be Miss Santee/Miss Santee Teen?

Sierra Billock: DON’T GIVE UP! It took me a long time to win this title. I competed once for Miss Santee Teen and four times for Miss Santee before I finally won! Some people questioned why I continued to go back year after year. It’s because I am determined. I knew this was something I wanted to do and I knew I could make an impact. For me that was enough. It didn’t come easily to me but I think that has made me appreciate it that much more. So to any girls out there who are thinking about competing I say go for it! Don’t let anyone or anything stand in the way of something you want to do.

Scouting Santee: What was the idea behind the Fashion Rocks the East fund raiser?

Sierra Billock: The idea is to involve past titleholders and contestants in a fun event to raise money for our scholarship fund. Every year many girls compete for the titles of Miss Santee, Miss Santee Teen, Miss La Mesa and Miss La Mesa Teen. However, with the current state of the economy it has been hard to get sponsors for these scholarships. Because fashion is a big interest of mine we decided to hold a fashion show to raise the funds.

Scouting Santee: Why is this fund raiser so important?

Sierra Billock: The young women who take on the titles for the year are very dedicated to the roles they play. These women put their a lot of time into helping out their city and surrounding cities for the year. Not just anyone can take on this title. It takes a smart, confident and determined young woman to do this job. These are women who also put school as a priority in life. That is why it is important that we raise money for their scholarship.

Scouting Santee: Is there anything else you would like people to know about the Pageant or the fund raiser?

Sierra Billock: It is going to be a really great event! As Miss Santee I also wanted to raise some money for a local charity. So I contacted Victoria at Michael’s Jewelers in Santee and she has donated a diamond and pearl necklace that is valued over $400. I will be auctioning or raffling this necklace at the event to raise money for Santee Santas. This group works all year round to help support families in Santee with food, clothes and toys. I am excited and hope we can make a lot of money for them!

Fashion Rocks the East is a fund raiser for both the Miss Santee and Miss La Mesa Pageants.  For more information or for tickets to the event, contact Alexandra Kuty, Pageant Director, at 619-698-4163 or via email misslamesapageant@yahoo.com.  You can also read my previous post on the event here.

Filed under Community, Meet Your Neighbor

This evening (Thursday, February 19) the Santee Library is holding its regular “Meet Your Neighbor” speaker series.  This month our neighbor is Allen Carlisle, Santee Lakes Park and Recreation Manager.  He is going to be talking about proposed developments at the Lakes and how they might impact the neighborhood.  This is a great opportunity to get more info about the Lakes and what is planned, as well as a chance to share your thoughts on the Lakes.

A side note: Santee Lakes will be the site next week (Wednesday, February 25) for a “Flip the Switch” ceremony to inaugurate a new solar energy system.  I’ll have more information on this soon.

Filed under Community, Meet Your Neighbor