Smokin’ Joe’s Barbecue had its Grand Opening celebration on Saturday, January 30, from 2:00-9:00 pm, and it was one busy day for everyone.  The restaurant is located in the Home Depot/Hometown Buffet section of the Town Center, in the same corner spot as two previous eateries.  From the looks of things, this one should be around for the long haul.  Smokin’ Joe Jones himself was on hand to cut the ribbon, greet people, and make sure everything was cooked just right.  I even found out what an “Old Fashion Pig Pick’n” is – but more on that later.

This is the third Smokin’ Joe’s Barbecue in the San Diego area (the others are in Poway and San Diego).  The restaurants have been around for a few years, but Smokin’ Joe’s barbecue style goes back some 60 years to his grandfather and grandmother in Mississippi, where he would help prepare the meats and baste them with the ‘secret’ sauce his grandfather made.  Joe proudly boasts that his special recipe won’t burn on the grill like many sauces, because he doesn’t use brown sugar.  Well, whatever it is he does or doesn’t use, it certainly seems like a winner.  During the two hours I was there taking photos of the goings-on, there was barely a moment for the crew to stop and breathe.  It bothered Joe that people had to wait, sometimes as long as 20 minutes, for their food because of the crowd – but no one seemed to mind.  I had the pulled pork plate with barbecued beans and a huge hunk of corn bread, and I can say the wait was definitely worth it. 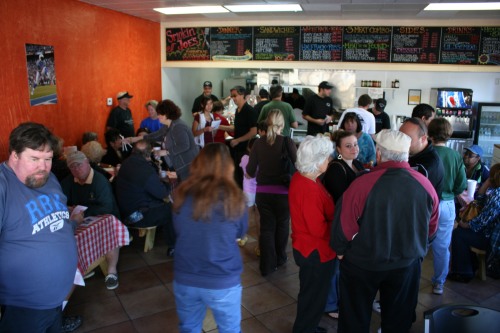 Now, about that “Old Fashioned Pig Pick’n” mentioned earlier.  This is where a whole pig is cooked in the smoker for several hours until the outside is black and the inside is falling-apart tender.  Then the succulent sow is cut open and the meat is picked out and chopped up for serving.  It was hard to tell what was the bigger draw here, the process of pick’n or the delectable results – but my guess is the samples of pork Joe  handed out. 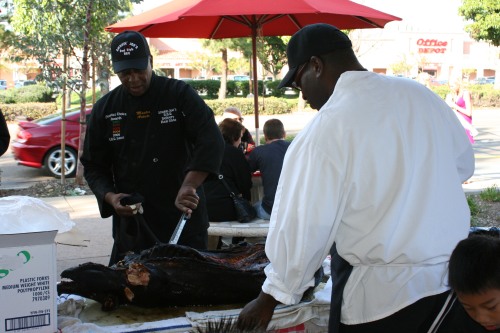 I had a chance to talk with Joe later in the day after the busiest time was over.  He has some big plans he hopes to be able to do here in Santee, and my guess is that he can pull them off.  I won’t spoil it for now, but let’s just say that Santee could eventually be the biggest name in barbecue west of the Rockies.

Presentation of a Certificate from Assemblyman Joel Anderson’s Office 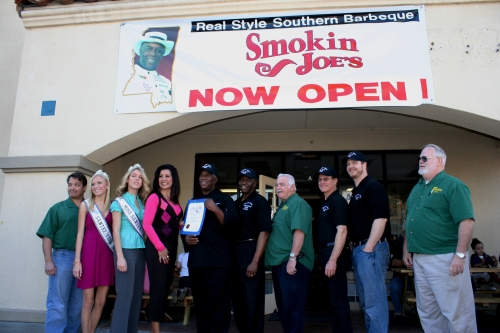 Santee Chamber of Commerce Members waiting for their orders 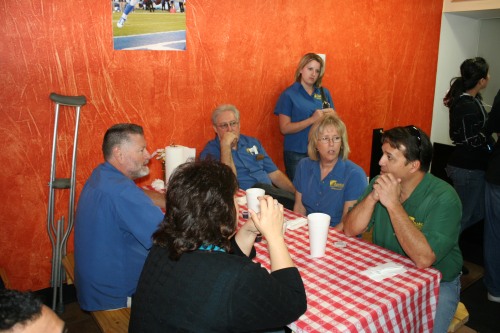