On Wednesday, June 24, Carlton Oaks Country Club was the site of the 6th Annual Golf Classic to support the Santee School District Foundation.  Some 100 golfers signed up to play and raise money to help support technology and the arts in Santee Schools.  In addition to the players, some three dozen companies and organizations signed on to sponsor the event.  All money raised from entry fees, sponsorships, raffles, and the silent auction go toward a $40,000 pledge the Foundation has made to help the School District reach its technology goals.

This year’s turnout was slightly lower than last year’s, due in part to a combination of the economy and multiple local tournaments in May.  But the lower numbers didn’t mean any less fun and enthusiasm among players, Foundation members, and other volunteers.  An extra “atta-boy” goes to Thomas Hootman, of Simply Spa, who stepped in to cover for Chamber Executive Director Warren Savage, who had to attend the Las Colinas hearing downtown that same morning.  Simply Spa also provided chair massages for golfers who had perhaps strained an oblique teeing off on the 18th hole.

Another sponsor, North Island Credit Union, provided carne asada tacos to help keep players going until the big dinner.  They were also popular with the volunteers. 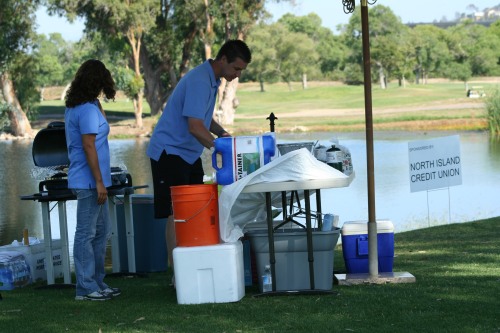 None of this could have happened without the efforts of the Santee School District Foundation.  A hearty congratulations to the Foundation and its volunteers.

A Great Day for Golf 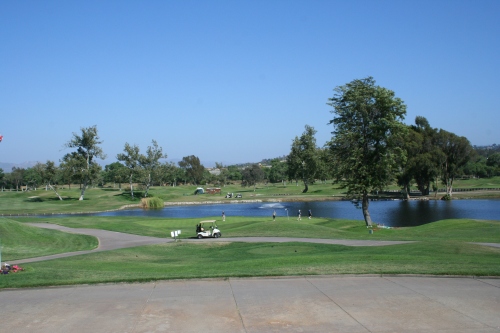 Fun on the Links

Well, the County Board of Supervisors has voted 4-1 to expand Las Colinas – this in spite of overwhelming opposition from the City of Santee, the Chamber of Commerce, business owners, and citizens.  From information I’ve been able to gather, it appears there was little real consideration of alternatives by the Board – their minds were made up some time ago.  But Santee did its best, including putting together an information campaign and an online opposition.  Several Santee leaders spoke against the proposal at the Board meeting, but to no avail.

Warren Savage and Thomas Hootman being interviewed for Fox 5 News